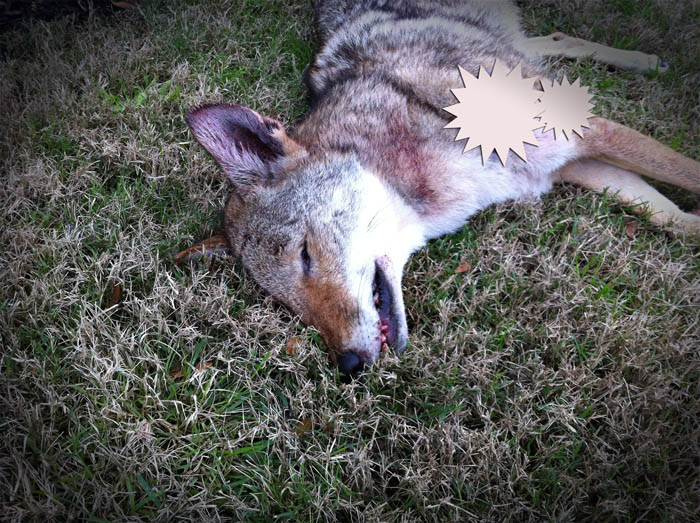 A couple of weeks ago, my wife and I were leaving the subdivision when she said “I think that’s a coyote!” I quickly looked and sure enough it was crossing the road heading to the bayou. At first I was surprised and then a little concerned wondering if it was skulking around the neighborhood at night. We sometimes walk our dogs at night and I had thoughts of a standoff in the neighborhood. Us and the dogs vs. a coyote or coyotes. Who would win that fight?

Well I’m sad to report that the coyote was hit by a car last Friday night. As we were running errands on Christmas Eve, I noticed that the coyote was killed and lying at the front entrance to our neighborhood. Although I did have some concerns KNOWING that a coyote may have been finding dinner in our neighborhood, I was sad to see that a wild animal had been killed not by the normal predatory cycle of life process. I had never seen a coyote in person so I turned around to look and took a quick picture with my cell phone.

The injuries were not that bad but to avoid offending anyone, I put a few graphics over the boo boo spots on the coyote. 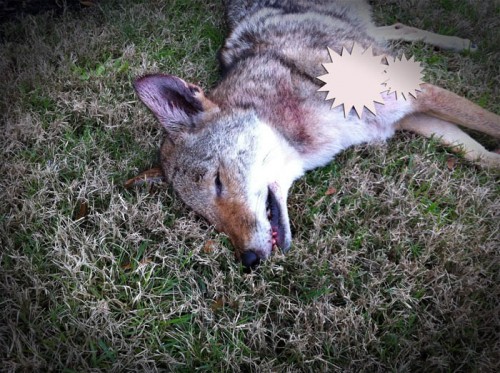 One thing that Amy asked when I got back into the car was whether the coyote was a female. I then realized that she was wondering if it was a mother and there were pups that had ben recently born. Thankfully, it was a male. It is a shame that a wild animal’s life was cut short but a far worse situation would have been if the coyote was a female and left newborn pups to fend for themselves.